What is Herringbone flooring? 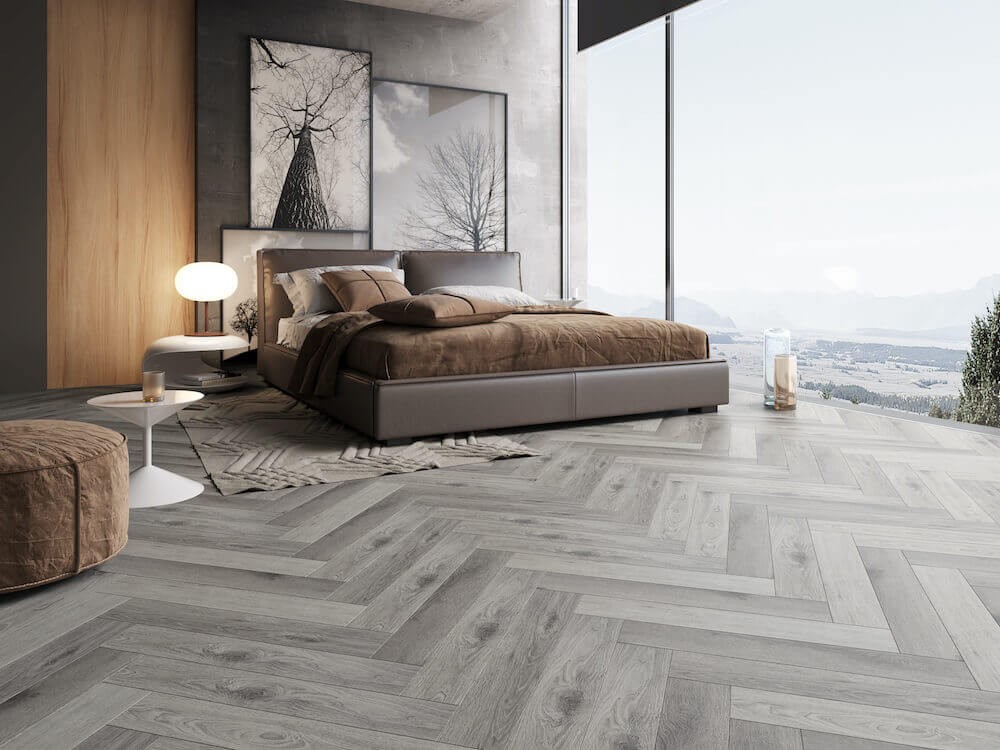 Might you have seen the herringbone design pattern several times in your life, but probably did not notice how long it has been around, and all the different ways it has been utilized. The herringbone pattern is an arrangement of rectangles used in parquetry, floor tilings and road pavement, so named because of its similarity to the bones of a fish such as a herring. Also, Herringbone patterns can be found in cloth, mosaics, wallpaper, and clothing (herringbone cloth), shoe tread, jewelry, security printing, sculpture, herringbone gears, and elsewhere.

It was a pattern first used by the Romans after they discovered that roads could be made a lot more stable and solid by aiming the bricks in the same direction that the traffic flows in. While the pattern was used in interiors from Roman times till the Middle Ages. In the 16th century, the herringbone pattern made it into wooden flooring. One of the first examples of wooden herringbone can be found in the Francois 1 Gallery at the Chateau de Fontainebleau, which was installed in 1539. From the seventeenth century to the second half of the eighteenth century, parquet floors surged in popularity. Patterned wood floors were laid in castles, palaces and the homes of the nobility and wealthy throughout Western Europe. Herringbone wood flooring continued to be a popular choice throughout the 18th and 19th century, most notably in Paris during the Haussmann era when much of the city was rebuilt in a large scale urban planning effort. A return to a more natural look in recent years has seen herringbone patterns once again become the wood flooring of choice for many traditional and contemporary schemes.

When it comes to parquet flooring, herringbone patterns can be accomplished by laying hardwood planks at 45 degree angles. The pieces are cut in perfect rectangles and then staggered a bit so that the end of one plank meets the side of another forming a broken zig zag. Alternating colors may be used to create a distinctive floor pattern, or the materials used may be the same, causing the floor to look uniform from a distance. Laying a herringbone floor can be very challenging, since the number of small rows must be made to line up evenly, which can be difficult in a room which is not perfectly flat or square. Small mistakes in a herringbone floor can be rather glaring because of the way the pattern lines up, so care must be taken. 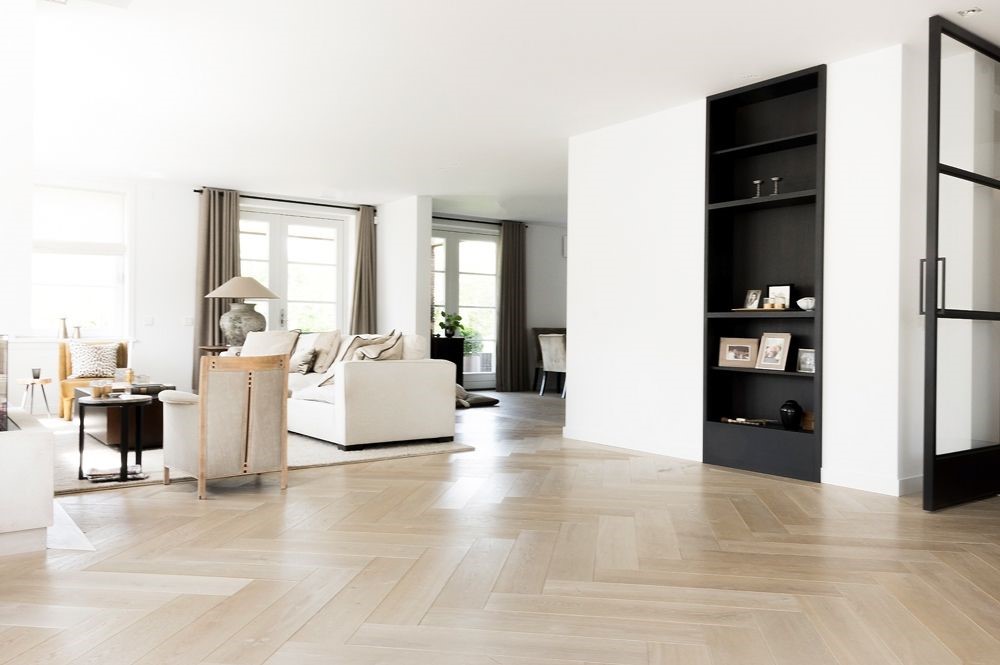 Herringbone is a geometric zigzag pattern depicting the bones of the herring fish. The pattern structures repeating right-angled rectangles set at forty-five-degree angles to each other. Every rectangle come across another rectangle at a perpendicular, ninety-degree angle, and each pair is slightly offset from the pairs immediately above and below, which form “L” shapes. This gives the pattern an illusion of overlapping. Typical uses of the herringbone design include textiles, floor tiling, and other interior design projects.

You might confuse the herringbone pattern with the chevron pattern due to their nearly identical appearance; however, there is a major difference. Herringbone uses perfect rectangles, meaning all four corners of the shape are right angles (ninety degrees). On the hand, chevron uses parallelograms—that is, two corners use angles less than ninety degrees, and two corners use angles greater than ninety degrees. As a result, chevron’s shapes form a point and a straight line as the pattern stacks; meanwhile, herringbone’s center point zigzags as the pattern stacks.

Ways to Use a Herringbone Pattern

Herringbone’s geometric zigzag pattern has numerous potential applications in home decoration. Here are some ways you might work herringbone into your next DIY home improvement project:

● Cover a dining table. Use a herringbone wood pattern to accentuate mid-century modern bedroom furniture, or use reclaimed barn wood to build a stylish, country-chic dining table featuring the pattern.

● Create an accent wall. Create a dramatic difference between paint colors in your living room by using painter’s tape or wall stencils to apply a herringbone pattern to one wall.

● Install mosaic tile. Use a single color or bold colors to create a herringbone mosaic tile design on your bathroom floor or a unique tile backsplash behind the bathroom sink. Shower floor tile and shower wall tile layout can take significant time and attention to detail, so plan your work accordingly or consult a professional. At the very least, use spacers to achieve a consistent tile installation from your first tile to your last.

● Lay down floor tile. Although people have been using herringbone tile patterns since at least Ancient Roman times, present-day homeowners and designers have found creative ways to implement the design in modern homes. For instance, you could remodel your entryway with a herringbone floor tile that seamlessly blends with your patterned floor. Alternatively, you might use a herringbone pattern to demarcate where your walk-in shower tile begins and other bathroom tile ends.

● Make over a headboard. Designing a herringbone-patterned headboard can be a cost-effective and easy way to make over your old bed frame. Stick to just one color of wood or paint, or consider using different wood tones or stains to create interesting clashes of color in your design.

● Update a kitchen backsplash. A herringbone backsplash tile can add visual complexity and texture to your kitchen space. This intricate design makes for an interesting border around bright subway tile and complements neutral-colored grout or countertops with limited color variation. Refrain from installing herringbone patterns near multicolored butcher-block patterns or heavily veined marble countertops since the combination can appear busy or overwhelming. 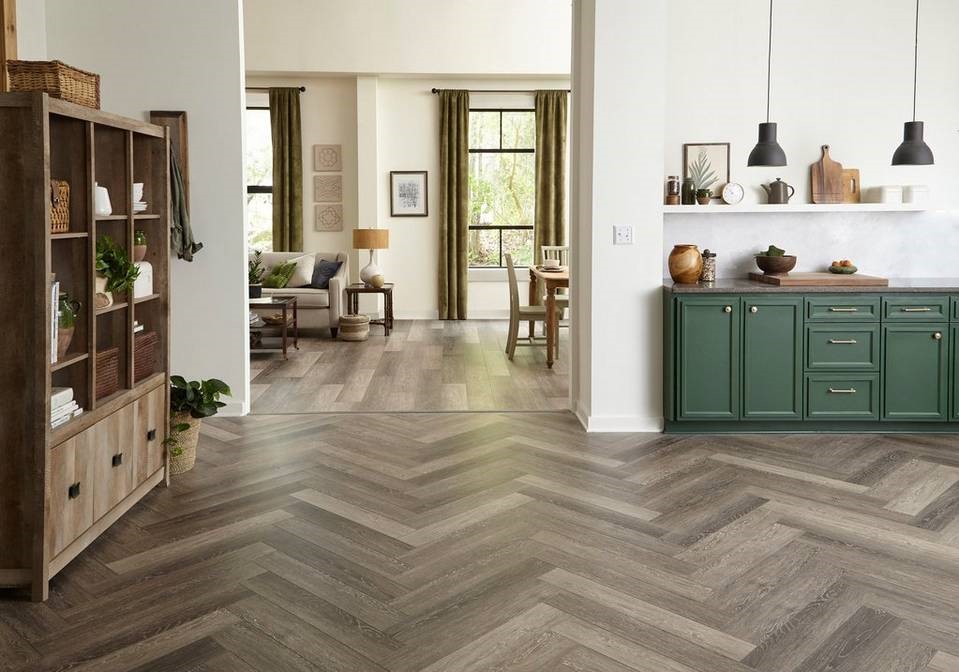 Herringbone flooring should be seen. This means that rooms with such flooring need to be clutter-free and not over-furnished. The goal is to create a feeling of space and lightness. The herringbone pattern creates the illusion that a room expands. This is very useful for smaller rooms. The best way to create a feeling of spaciousness or to create the impression that a room is bigger is to use the appropriate size pieces. If you intend to hire a flooring specialist, have them set up samples. A common opinion is that smaller blocks make rooms seem bigger, while larger blocks are more proportionate in large rooms. The trick is to make the pattern obvious. In a large room, smaller blocks can make the floor seem too busy and the actual pattern is lost.

In addition to choosing the right size planks, choosing the right color is also significant. If the flooring is to be laid throughout a home, and if that home has more small rooms than big rooms, choose for a lighter color. This will help create a sense of openness. However, the downside of lighter floor color is that it doesn’t hide marks and scratches. If opting for a darker color, the wall color needs to be light to create a contrast in order for the floor to stand out.